MEMO is a method for Multi-Perspective Enterprise Modeling. The method has been developed and extended at our chair for more than two decades and continues to be a subject of active research. MEMO includes a set of integrated domain-specific modeling languages (DSMLs) to describe various aspects related to an organization’s action system (e.g., goals, organizational structure, and business processes) and information systems (e.g., IT infrastructures). Further, because all MEMO modeling languages are integrated, it is possible to interrelate different model elements from both organizational and information-technological areas, enabling to build an integrated, multi-disciplinary view of an organization.

This research project, MEMO4ADO, is aimed at implementing a specifically prepared and revised subset of MEMO in the (meta) modeling tool ADOxx. MEMO4ADO is especially tailored for enterprise modeling beginners. The (meta) modeling tool ADOxx has been substantially developed at the Research Group Knowledge Engineering, University of Vienna. The project is embedded in the context of the Open Model Initiative that has been initiated by our research group. All research results are openly provided as part of the Open Models Laboratory at the University of Vienna. 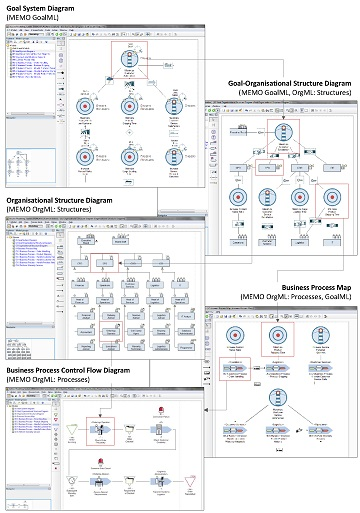